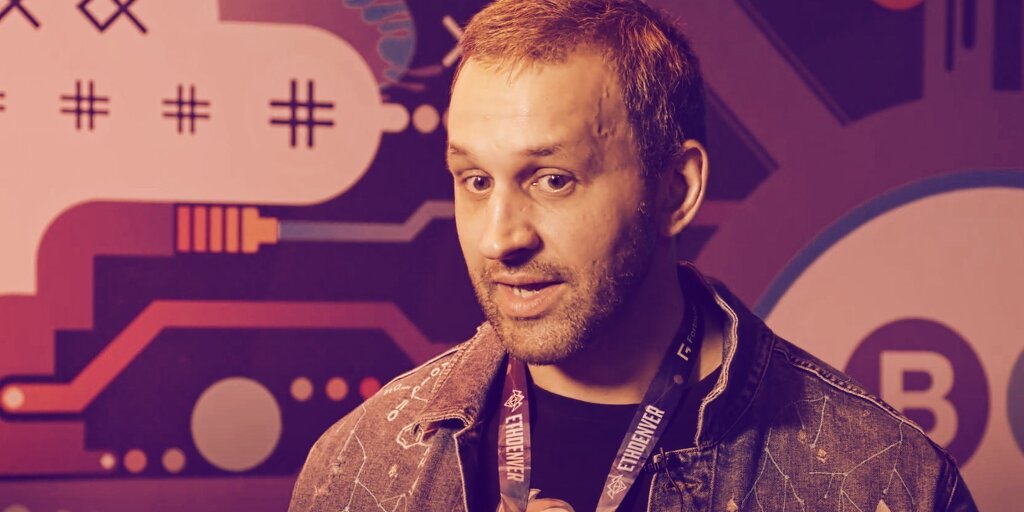 In briefDmitry Buterin, father of Ethereum inventor Vitalik, is a Russian-Canadian entrepreneur and angel investor.
He has strong views on everything from parenting to Vladimir Putin and is an advocate for political reform in Russia.
He explains why ETH’s 2017 highs were premature, and highlights some of the best projects building on the platform.
The jailing of Russian opposition leader Alexei Navalny last month unleashed a tide of protest around the world. But it touched an especially painful splinter at the heart of one prominent Russian emigre, Dmitry Buterin, who resolved to do something about the tragedy.
Buterin is the father of Ethereum creator Vitalik Buterin, whose revolutionary blockchain platform reached a record market cap of $196 billion last week. Ethereum’s decentralized, transparent, censorship-resistant ethos is the very antithesis of the world Buterin senior left behind.
So last week he tweeted a heartfelt plea to his followers to retweet Navalny’s video and asked the Ethereum community in Russia to set up donations toward the cause. The video details the widespread and systematic corruption perpetrated by Russian President Vladimir Putin and his cronies, over twenty years.

Dmitry Buterin loathes Putin: “He’s KGB, and those are the people who tortured and killed millions of Russians and Ukrainians. Can we trust him?” he said recently, during a call with Decrypt.
These days, his home is in the heart of Toronto, and has two young daughters who are Vitalik’s halfsisters. The city’s CNN tower was visible in the background, as he spoke about his Russian heritage, his approach to raising the boy who would create Ethereum, and why—unlike in 2017, when ETH reached its previous all-time-high—this time, it’s different.
Russian roots
The man who raised Ethereum’s genius inventor has myriad interests, which span from spirituality to software, aging, parenting, and of course Putin. He has strong views on all of it, though his Twitter persona—he has 13,000 followers—tends to come off as warm and fuzzy and light-hearted, even when he gently spars with Twitter troll Udi Wertheimer, a notorious Ethereum skeptic. The social media version differs from the man in person (on Zoom) who projects a steelier, more guarded core.
Dmitry Buterin is a serial entrepreneur and angel investor. Image: Dmitry Buterin.Buterin was born in 1972 in the Chechen capital of Grozny, in Russia’s wild, southern reaches. As a child, he was bombarded with incessant propaganda—“brainwashed” people, the dregs of the cult of Lenin, he said. He endured the usual shortages of toilet paper and other essentials, as well as the low-level corruption and duplicity that permeated life in the Soviet Union in the 1970s and 1980s. It did not make him love his country.
Dmitry Buterin said that his upbringing made him ideologically predisposed toward Ethereum, which is “aligned with my deeply-seated passion for openness, transparency, [and] freedom. Because of growing up in the Soviet Union, and seeing the authoritarian regime and their oppression and their bigotry, for me, decentralized systems hold so much promise for us building a better future.”

But it was in the Soviet Union, in Grozny, where a friendly neighbor named Vitaly helped him develop his early interest in electronics. At 17, the aspiring young software developer and entrepreneur moved to the Russian capital to study Computer Science at the Moscow Institute of Electronic Engineering.
After graduation, he married Natalia Ameline, a Cybernetics student at the National Research University of Electronic Technology. He worked as a software engineer and then a business consultant, in Moscow. Ameline was from Kolomna, a city-suburb, some 70 miles southeast of Moscow, and that’s where their only child, a son, Vitalik was born in 1994.
Dmitry said that the boy was named after the man that helped further his knowledge of electronics. Then he laughed dryly and said that “maybe [Ameline] would have a very different recollection.”

Three years after his son was born, Buterin senior co-founded his first business, a financial software reseller, and consultancy, and has been a serial entrepreneur ever since.  He’s the founder of three multi-million dollar businesses, including management software startup Wild Apricot, which was sold to US software giant Personify in 2017.
Unlike the vast majority of Russians, Buterin’s business interests allowed him to travel abroad (to what he calls “the normal world.”) And when Vitalik was six, the family of three left Russia for good.

Though Dmitry and Ameline subsequently divorced, they both set up blockchain educational non-profits. Dmitry runs BlockGeeks, and Ameline is a co-founder of CryptoChicks. Buterin also invests in and mentors various blockchain start-ups.
Extended family—Dmitry’s brother and parents—soon followed them to Canada. Vitalik lived mostly with him, said Dmitry, who later remarried.
Raising the Father of Ethereum
Putin came to power shortly after the Buterins left—the start of a two-decade rule that would see Russia gradually diminish in international standing, due to a combination of human-rights atrocities, economic mismanagement, and the erosion of democracy.

Yes. And i can’t believe the bravery of Navalny to go back to Russia and then release this
— Dmitry Buterin (@BlockGeekDima) January 21, 2021

Buterin has written about the danger of bestowing one’s trauma on a child. He spoke about that in our interview and was careful to point out that his own trauma was more existential than anything else. “Those kinds of unprocessed emotions and stories—think about it as a splinter stuck in you,” he said. “Your mind is trying to protect you from touching that splinter.”

Dmitry Buterin said he tried to protect his young son from the splinter, too. When Vitalik initially appeared to be slow learning to speak, Dmitry, a harsh critic of “heavy-handed attempts to fix kids,” was unperturbed: “You know, they’re not broken. They just have this uniqueness. And that uniqueness is expressed in different ways,” he said.
Vitalik Buterin with his father, in Russia. Image: Dmitry ButerinVitalik’s way, it turned out, was math, creating numeric patterns, and playing with Excel, even before he left Russia. By nine or 10 he was already programming video games.
Ethereum’s biggest asset
Vitalik Buterin was 19 when he invented a decentralized computing platform that is revolutionizing finance. The platform, which relies on smart contracts, was Vitalik’s response to the limitations of Bitcoin, which Dmitry introduced him to when he was 17. It seeks to go above and beyond and enables any decentralized, censorship-resistant application imaginable.

ETH, the second most popular crypto-token, has seen year-to-date gains of around 140%, compared with Bitcoin’s 30%,  and analysts are betting the upside trend will continue. But for Dmitry Buterin, “it’s just a number,” albeit one that’s indicative of all the ongoing progress the platform has made. “It’s really just a small indication of society, the markets, recognizing all of the incredible stuff that has been happening and has been built on Ethereum,” he said.
In the five years since it was launched, tens of thousands of developers have built on Ethereum; it’s spawned an ecosystem that spans decentralized finance, collectibles—known as NFTs—social tokens, and more. But Buterin senior believes that the caliber of people building on the platform his son created is its biggest asset.
“I was very confident, always, in the success of Ethereum, because I know the kind of people who are involved,” he said.

He’s not hands-on involved with Ethereum but has kept a watchful eye on its progress.
“Now, as I follow [the] DeFi space and all the different projects and tokens, I’m less inclined to do deep technical analysis, but I’m fascinated to get a sense of people,” he said and named DeFi projects Aave, MakerDAO, and Synthetix as some of his personal picks.
Why this Ethereum all-time-high is different
This isn’t the first time interest in Ethereum has reached a fever pitch. In 2017, its fundraising approach, the ICO, was aped by thousands of crypto startups. The boom saw ETH reach a high of almost $1,400 in December that year.
But, by the start of 2018, the idea that cryptocurrency was a golden ticket had been replaced by uncertainty and confusion about the future of digital money. Many ICO-backed companies failed or were scammy, resulting in a flurry of SEC suits.
“[Vitalik] had a lot of concerns about all of these crazy ICO’s,” said Dmitry Buterin. “He also carried a lot of anxiety about all of these things that Ethereum still has to solve.” In a December 2017 tweet about the crypto market’s new record market cap, the young Buterin implied that success had come too easily.

But now, three years later, Dmitry Buterin feels that the ecosystem and the Ethereum community may have turned the corner.
“When I now look at [Vitalik’s] communications and our text exchanges, I think that he’s much, much happier, much more confident with all of the stuff that’s been happening with Ethereum,” he said.
Some of that’s down to steady progress with the platform’s major upgrade, Ethereum 2.0, which will see it transition from a proof-of-work to a proof-of-stake blockchain—a boon for its scalability prospects, and a potential answer to the problem of escalating fees.

But Dmitry Buterin believes that Ethereum is succeeding because useful projects such as Aave and Chainlink are finally being built:  “We have way more substance now than we had in 2018,” he said. “All of these things are now coming to fruition.”
He has plenty of company in his optimism, of course. Ethereum is having a major moment, blowing through one all-time high after another having reached $1,752. The price of Ether rose an astounding 400% in the past six months.
Dmitry Buterin with his daughters Katya and Michelle (known as Misha,) Vitalik’s halfsisters. Image: Dmitry ButerinDuring that same period, the prodigal son, Vitalik, has been in Singapore where he’s taken a step back from his unofficial leadership role, according to his dad: “In the beginning of Ethereum, he was much more hands-on in a lot of research and cryptography and there is much less of that stuff on his own plate right now, just because there are so many other wonderful, smart, amazing people involved.”
Instead, Vitalik has found more time for abstract and philosophical thinking. “He’s connecting the dots on a higher level, the level of systems and the way [they interact with] society and humans,” said the elder Buterin. The father sounded especially proud of his son for that.
A previous version of this article incorrectly stated that “Vitaly” helped Dmitri Buterin with coding, and that the Buterins lived in Koloma.